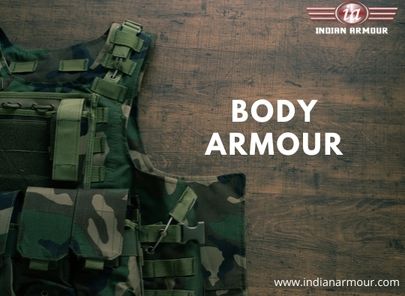 Body armour, as you may be aware, is a type of protective ballistic gear worn to guard against small weapons fire, knife assaults, shrapnel, ricochets, and other projectiles, as well as other life-threatening hazards. Inside a plate carrier, also known as a “bulletproof vest,” body armour plates are deployed.

Body armour comes in a variety of designs, shapes, levels of protection, weights, styles, sizes, and possibilities. Only hard body armour can stop rifle shots, whereas soft body armour and lower levels of hard armour can defend against handgun rounds.

Body armour is based on the simple transfer of energy as its fundamental concept. Body armour plates are meant to distribute the energy and bend the bullet when impacted by a bullet round, considerably reducing blunt force harm to vital organs.

Strong fibres are firmly woven in a perpendicular weave to generate a solid sheet of material for body armour plates. Twisting increases the strength, density, and thickness of the fibres. The body armour plate is covered with resin, plastic, and/or other materials to make it more solid. When single strands are interwoven, they reinforce and safeguard one another from all directions.

Since the fibres work together in the individual layer and with other layers in the vest to prevent the bullet from penetrating, a huge area of the body armour is engaged in stopping the bullet from penetrating. This also aids in the dissipation of forces that can cause nonpenetrating injuries also known as blunt trauma to internal organs. However, currently, no material exists that allows body armour to be developed from a single sheet of material.

Most common low- and medium-energy pistol rounds can be stopped by today’s new generation of concealable bullet proof vests, which come in a range of levels of protection. Bullet-proof vests designed to withstand rifle fire are often made from hard materials like ceramics and metals and are either semirigid or rigid in construction. It is impossible for uniformed patrol officers to wear it on a regular basis due to its weight and bulkiness, thus it is saved for tactical scenarios where it is worn externally for brief periods of time when confronted with higher-level threats.

Looking Ahead body armour will undoubtedly improve as technology advances and body armour producers continue to look for lighter, more effective materials and designs. As more individuals become aware of the benefits of modern body armour, the market for it keeps expanding.

Other materials for body armour such as liquid body armours or sheer thickening fluids, made up of liquid, poly ethylene glycol, and hard silica particles are presently being explored by researchers.